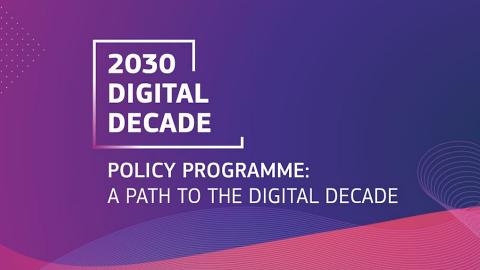 The Commission welcomes the political agreement reached by the European Parliament and the Council of the EU on the 2030 Policy Programme: Path to the Digital Decade. The programme sets up a monitoring and cooperation mechanism to achieve the common objectives and targets for Europe’s digital transformation set out in the 2030 Digital Compass. This concerns the area of skills and infrastructure, including connectivity, the digitalisation of businesses and online public services as well as the respect of the EU’s Digital rights and principles in achieving the general objectives.

Commissioner for the Internal Market, Thierry Breton, said: “The Digital Decade policy programme is the way towards a more innovative, inclusive and sustainable future for Europe. Unlocking the potentials of the digital transformation, specifically by setting up and implementing multi-country projects, will pave the way for a competitive and sovereign Europe. We have to swiftly embark on the Path to the Digital Decade to make sure Europe is ready for the challenges in an evolving and inter-connected world.”

Path to the Digital Decade

To effectively monitor progress, the Commission, together with the Member States, will develop projected EU-level trajectories for each target. In turn, the Member States shall propose national strategic roadmaps, outlining their national projected trajectories and actions to achieve the objectives and targets, including planned regulatory measures and investments.

Progress will be measured with key performance indicators (KPIs) based on an enhanced Digital Economy and Society Index (DESI), and evaluated against the developed trajectories in an annual report on the “State of the Digital Decade” that will be presented to the European Parliament and Council. To give a comprehensive overview and analysis of the digital transformation, the report will also review progress made with regard to the Digital Decade targets, objectives, as well as rights and principles.

Member States and the Commission will cooperate together to address areas where progress is insufficient and where there are continuous deviations from national trajectories. At any point, the Commission and Member States may undertake joint commitments and establish multi-country projects to meet the 2030 digital targets.

The Commission shall review the targets by 2026 to take stock of technological, economic and societal developments.

Large-scale projects are critical for achieving the digital targets and delivering the digital transformation by 2030. Through multi-country projects, Member States can pool resources and cooperate closely to build digital capacities that they would struggle to deliver on their own.

The Commission has identified an initial list of areas for investment for multi-country projects, including common data infrastructure, deployment of 5G corridors, connected public administration, high-performance computing, European Blockchain Services Infrastructure and low-power processors, for example. The Commission is ready to guide Member States in defining and developing multi-country projects and may suggest some during the cooperation cycle.

The policy programme creates a new legal instrument, the European Digital Infrastructure Consortium (EDIC). The EDIC will help in the implementation of multi-country projects and make it easier for Member States to join efforts when they invest in digital infrastructures.

The political agreement reached by the European Parliament and the Council is now subject to formal approval by the two co-legislators. Once approved, the Digital Decade policy programme will enter into force.

As a first step following the entry into force of the policy programme, the Commission together with the Member States will develop KPIs to measure progress towards the 2030 digital targets in preparation of the first annual report on the “State of the Digital Decade” to be adopted possibly already in June 2023. The KPIs will be enshrined in an implementing act. Within nine months, the Member States shall present their first national strategic roadmaps, which will launch the cooperation cycle.

The Commission initially presented the 2030 Digital Compass with targets in the areas of digital skills, infrastructures, businesses and public services, in March 2021.

During the State of the Union, in September 2021, President von der Leyen presented the proposal for a Path to the Digital Decade for Europe’s digital transformation by 2030. The proposal formalised the digital targets within a broader set of objectives and provided a strategic framework to achieve them.